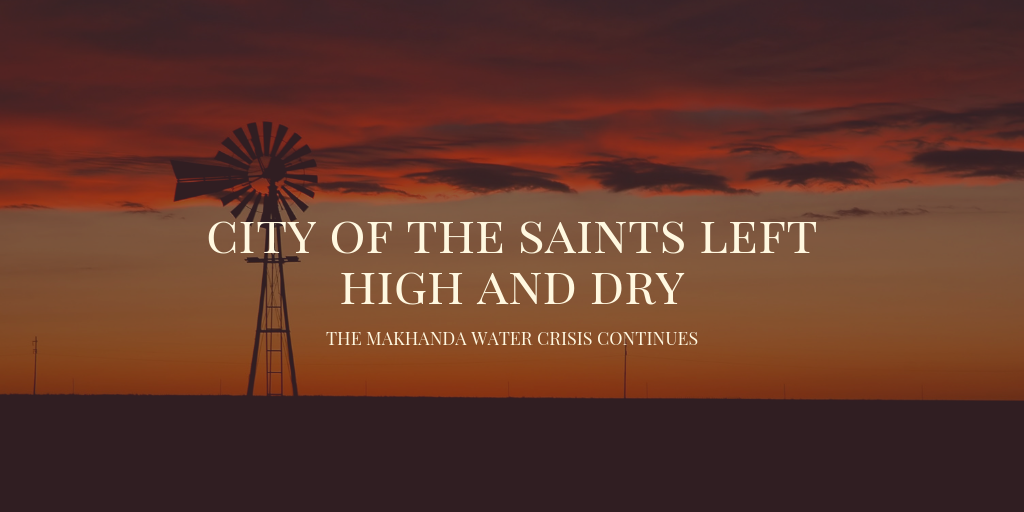 In the old days, coal miners would carry canaries into the mine as an advance warning of danger (the presence of dangerous gasses). If the bird died then it was time to evacuate to safety. With Makhanda, formally known as Grahamstown, in the grip of a water crisis caused by a combination of drought and mismanagement, is this an advance warning for the nation's water future?

Despite the efforts of The Gift of the Givers to find water sources and President Cyril Ramaphosa using Makhanda to highlight the water crisis in his Freedom Day address, the future of the Town remains in the balance.

Already under pressure, the Town is gearing up to receive more than 200, 000 people who will be attending the National Arts Festival from June 27 to July 7. Earlier this year the taps ran dry during February, prompting the city officials to bring the NGO Gift of the Givers in to provide disaster relief for the thirsty town. Since then, after drilling 15 boreholes the NGO has departed Makhanda leaving their intended humanitarian relief efforts unfinished due to a monetary dispute with the Municipality.

Studies show that the resident population of Makhanda needs about 20 Megaliters of water per day. With the extra strain of the expected visitors, will these art enthusiasts be spending more time queuing for water than entertainment this year?

Despite the fallout between the Municipality and Gift of the Givers, the NGO has managed to make an incredible impact on the water resources of the Town. They provided a borehole that will supply the festival with 100, 000 litres of water per day, and a partnership from Engen where 100 water tanks were donated to the Makhanda Municipality.

Despite these efforts, the dams remain close to empty at 7% and as the drought continues with little rain expected, Makhanda and the inland areas of the Eastern Cape will remain bone dry until the expected rains in September.

Clearly, the nation should take this as a warning and make plans to safeguard their personal, domestic and business source of water. Looking at what is happening in Makhanda, we can't rely on the authorities, the municipality or goodwill to be there every time to bail residents out of a water crisis.

For Water Tank installations and Greywater Systems in Makhanda